Skip to content
We ship Anywhere In The World !!

Patek Philippe SA is a Swiss luxury watch and clock manufacturer founded in 1839, located in Canton of Geneva and the Vallée de Joux. Since 1932, it has been owned by the Stern family in Switzerland. Patek Philippe is one of the oldest watch manufacturers in the world with an uninterrupted watchmaking history since its founding. They designs and manufactures timepieces, including some of the most complicated mechanical watches. The company maintains over 400 retail locations globally and over a dozen distribution centers across Asia, Europe, North America and Oceania, and in 2001 it opened the Patek Philippe Museum in Geneva.

Patek Philippe is widely considered to be one of the most prestigious watch manufacturers in the world. Over the years, notable Patek Philippe patrons and timepieces owners include Queen Victoria, Queen Elizabeth II, Pope Pius IX, Marie Curie, Albert Einstein, John F. Kennedy, Nelson Mandela, Pablo Picasso, Pyotr Tchaikovsky and Leo Tolstoy. On June 2019, among the world’s top ten most expensive watches ever sold at auctions, seven are Patek Philippe watches. In particular, Patek Philippe Henry Graves Supercomplication, the world’s most complicated mechanical watch until 1989, currently holds the title of the most expensive watch ever sold at auction, fetching 24 million US dollars (23,237,000 CHF) in Geneva on November 11, 2014.

Nowadays Patek Phillipe is very popular amongst collectors, demand is much higher than supply, as you know that some models were trade at 2x – 3x of its retail price, some certain unique or limited models can be more than that, and numbers are still rising.

There’s also other fenomena with Patek Philippe, along with its popularity, collectors these days like to dress up their Patek Philippe by switching the original strap with aftermarket strap which is very popular now, as they simply wants to looks different. Here’s some samples that we found:

Some of popular Patek Philippe models right now, such as:

The Journey Of Velcro Straps

I will always response your contact in less than 24hours.… 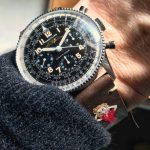 SIHH (now known as Watches & Wonders) and Baselworld are…

WhatsApp Chat is free, download and try it now here!